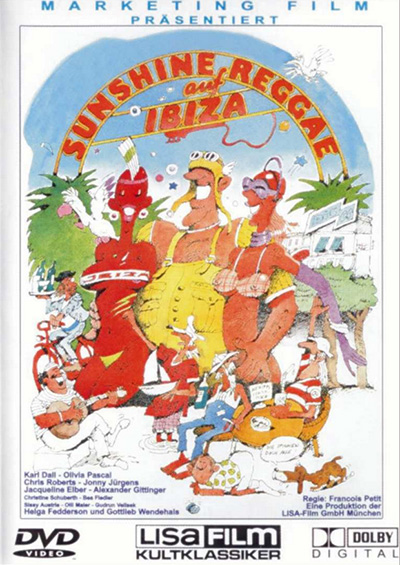 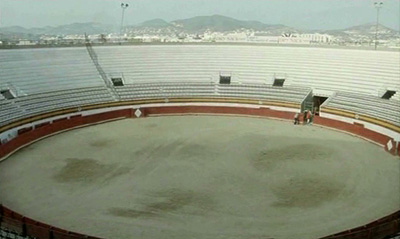 Synopsis: Karl is a German farmer and he is in love with the famous singer Lina, to whom he writes numerous love letters. When Karl discovers that Lina is touring Ibiza, he decides to visit the island in an act to demonstrate his feelings towards her, but unfortunately, Karl is not the kind of man Lina is interested in. But coincidentally, when Karl is in Ibiza he meets an eccentric millionaire with whom he has a strong resemblance.

This is a comedy starring German actors Karl Dall, Olivia Pascal, Bea Fiedler and Isa Haller. Pascal and Fiedler had also appeared in the film ‘Summer Night Fever’ (1978) which was shot in Ibiza just like ‘Sunshine Reggae auf Ibiza’, produced by the company Lisa Films. The film is directed by Franz Marischka, who signed the film under the pseudonym of François Petit, and was filmed in the city of Hamburg, the East Frisian and Ibiza.

The shooting took place in September 1983 and the scenes were recorded in the districts of Dalt Vila, Marina, s’Alamera, Passeig Marítim and Prat de Vila (where a sequence of the former Plaza de Toros is included), as well as several nightclubs, Platja d’en Bossa, Ses Salines area, a hotel located in Puig des Molins and different lodges of the island.

During the shooting, the film title was ‘Itsy Bitsy Ibiza’. This was the name of a song sung by several actors in the film. Finally the title was changed to ‘Sunshine Reggae auf Ibiza’. This change was due to the commercial success of the song ‘Sunshine Reggae’, a best selling composed by the Danish band ‘Laid Back’ in 1982.