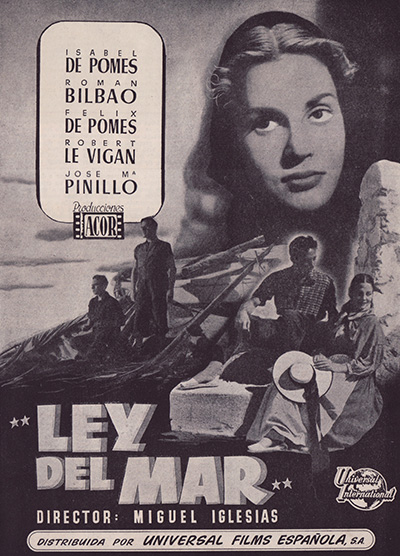 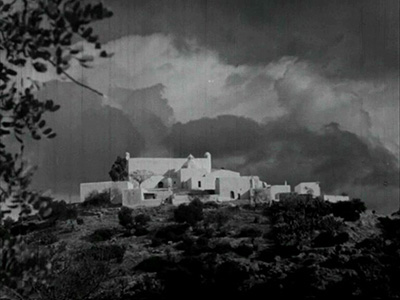 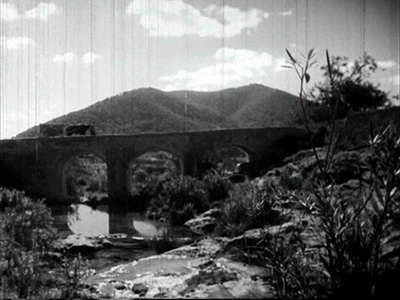 Synopsis: Antonio, a local farmer from Ibiza, is in love with Margalida, a woman belonging to a family of fishermen. Rafael, the father of Antonio, feels a kind of hostility towards seafarers and does not approve their love. Rafael also intends to marry his son to the heiress of a wealthy farmer. Finally, Rafael will understand that Antonio has to shape his own happiness.

‘Ley del mar’ is the first feature film shot on the island of Ibiza and the plot is inspired by the novel ‘Los muertos mandan’ (1908), written by Vicente Blasco Ibanez. The book, set in Majorca and Ibiza, generated much controversy between the Ibizan population by the exaggerated and sensationalized portrayal of its idiosyncrasies. The historian Isidor Macabich, in one of his articles in the Diario de Ibiza, wrote about the novel, accusing the Valencian novelist, among other things, of having a “bizarre” imagination.

However, what attracted the Catalan film director Miguel Iglesias from Blasco Ibanezs’ book was not his story, but the fact that it was set on an island “untouched by tourism, hippies and as a film set”.

The exterior shots of Ibiza in ‘Law of the Sea’ were filmed in October and November 1949, in the neighborhoods of the Marina and Sa Penya en Vila, and mostly in the municipality of Santa Eulària des Riu, place where most of the plot occurs.

The filming of ‘Ley del mar’ was followed with great interest by the people of the island, where a small part of them took part as extras. Members of the crew, consisting of twenty-five people from Barcelona, ​​stayed at several private homes in Santa Eulària. Hostal Casa Juanito was the place chosen as headquarters during the making of the film and the owner of the hostal also makes an appearance playing a small role in the film.

At times, some of the film crew would head off to the capital of the island to enjoy their time at the bars of the port and the Ebusus Cultural Society, where French actor Robert Le Vigan, who plays the bigoted father of the farmer, would sing in some of those evenings.

To reduce production costs caused by filming on the island, the production moved to the Kinefón studios in Barcellona where the interior scenes were filmed in December 1949. Before proceeding filming in Barcelona, ​​the director Miguel Iglesias thanked the facilities during filming, stating through the Diario de Ibiza; “Along with the title “Isla Blanca”, for which Ibiza is known for, should be added “Film Island”. Although all the action of ‘Ley del mar’ takes place in Ibiza, exterior shots were also done in the Catalan town, Vilassar de Mar.

The film was screened in late February 1951 at the island in a private session. On March 1, Diario de Ibiza published the following review, which among some criticism of the superficiality of the plot also praised on how it reflected the beauty of Ibiza: “For the first time the film portrays the intimate life of our people and depict on film the beauty of the landscape, customs, the whole personality of the inhabitants, and therefore the strong contrast of the crisp white alquerias with the fields of red earth interwoven by paths, where the protagonists pass. (…) Creating the most pleasing picture by capturing skillful shots of the slopes at the coastline, shots with backlighting in which often appears a black and twisted pine, or when panning shows the bucolic horizon of the countryside (…) ”

Ley de mar’ was officially released on April 23, 1951 in the Capitol and Metropol cinemas in Barcelona. Overall, the national critics also praised the beautiful scenery and the local Ibizan customs depicted in the film, with the guidance of Zorah and José Manuel Tur.