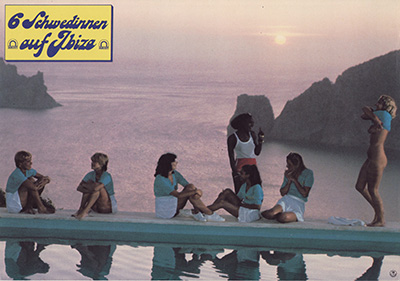 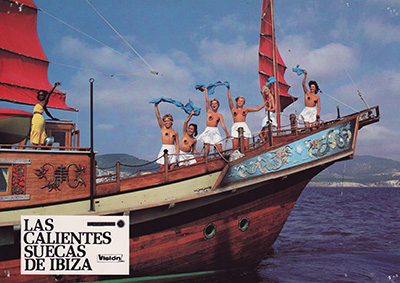 Synopsis: Six Swedish girls decide to gather money together for some holidays in Ibiza, but one of them is robbed and she loses all her money and documentation. They are welcomed by a woman who takes care of a cottage and they decide to find a job on the island in order to finish their vacation.

‘Sechs Schwedinnen im Pensionat’ (1979), ‘Sechs Schwedinnen von der Tankstelle’ (1980) and ‘Sechs Schwedinnen auf der Alm’ (1983). ‘Schwedinnen Sechs auf Ibiza’ was released in Spanish cinemas under the title ‘Las calientes suecas de Ibiza’ being the third film of the tetralogy brought by the Swiss director and producer Erwin C. Dietrich, who found the inspiration from the alleged sexual freedom of Nordic women. The film exploits the image of the island of Ibiza as a sexual paradise, as it can be seen in the following texts drawn from the Spanish advertising guide of film: “We are aware of the advertising about Ibiza that exist in both Spanish and foreign magazines. This has reached a point where Ibiza sounds like a myth, as it if were a paradise of freedom “(…)” Six Swedish girls willing to do anything in a wonderfully erotic island!”