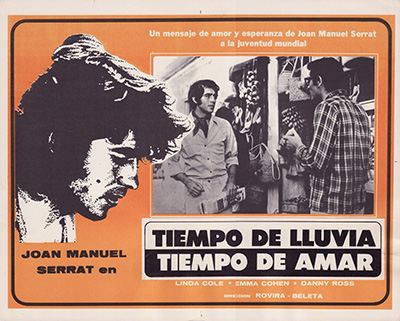 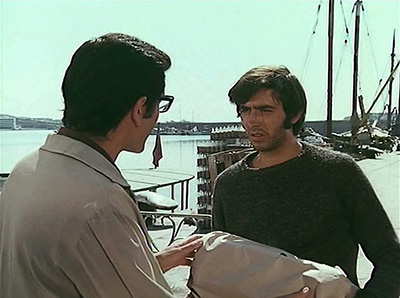 Synopsis: Joan, a young Ibizan fisherman, falls in love with Eva, an English tourist. Once Eva returns to London, Joan decides to go after her, but with no luck of finding her. During his stay in the city he meets Viggie, a French girl who introduces him to the hippie scene. When he finally finds Eve, she rejects him. Joan returns to Ibiza with Vigge and finds out that during his absence his father, with whom he had a conflictive relationship, had died.

Second feature film starring the singer Joan Manuel Serrat after ‘Palabras de amor’ (1968). ‘La larga agonía de los peces fuera del agua’ was a project promoted by the Catalan director Francisco Rovira-Beleta, who for years wanted to shoot a movie with Serrat. The script was written by the director himself and Joaquim Jordà (renouned documentary filmmaker and one of the founders of the Film School of Barcelona), and is based on Aurora Bertrana’s novel ‘Vent de grop’ (1967). In the book, the scenes that were set in a village of the Costa Brava were replaced by others in Ibiza and Formentera. According to Rovira-Beleta, as he stated to the magazine Nuevo Fotogramas: “I have decided to move the action from the Costa Brava to Ibiza, which seems to me a more commercial site for foreign markets”.

The filming of ‘La larga agonía de los peces fuera del agua’ took place during the summer months of 1969, in London, the Isle of Wight, Cannes, Ibiza and Formentera.

For its release in Spain two versions ver made, one dubbed into Castilian and another on in Catalan, one of the first films that the government of Franco authorized to release in this language. Still, in both versions distributed in Spain, due to censorship, a scene in which Serrat appeared nude bathing and another one where the actor walks down a London street where several strip club ads could be seen were left out.