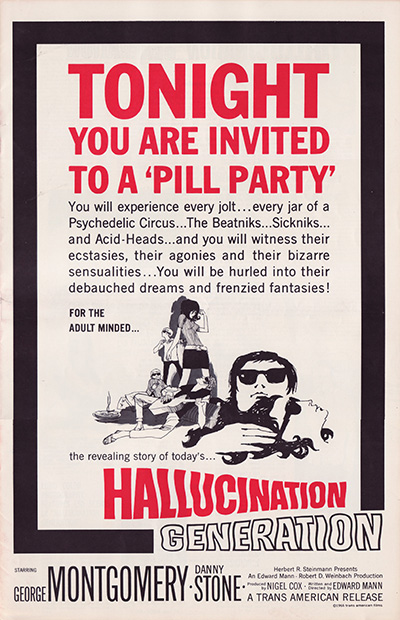 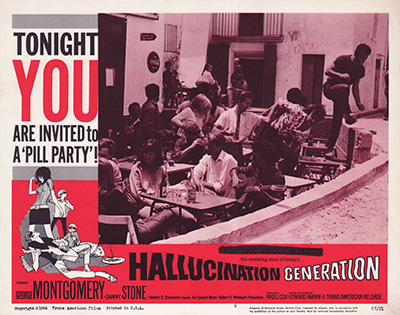 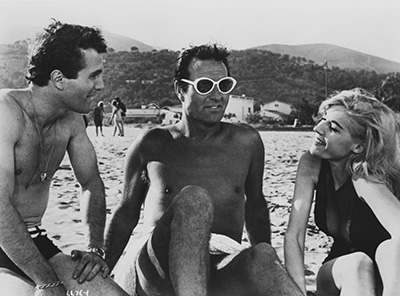 Synopsis: Young American Bill goes to Ibiza to meet his friend Denny, who lives with other non-national seekers of emotions, sexual promiscuity and drug use. Bill loses all his money gambling. Under the influence of drugs, he agrees to commit a robbery in Barcelona to pay up his debt.

‘’Hallucination Generation’ is a feature film based on a true story popularly known as “El crimen de la calle Aragon”. This tragic event occurred on November 17, 1962, when a US Army deserter who had consumed 30 pills of amphetamine (centramina), murdered a businessman in Barcelona who he initially only wanted to steal. The theft had been planned in Ibiza, where the American had casually met a former lover of the businessman. After the murder, those involved in the crime were arrested by the Spanish police. The trial took place in March 1964 and due to the large number of audience, it was held in the a greater hall of the Provincial Court of Barcelona. Since some of the accused were of foreign nationality, the process was also covered by several international media.

‘Hallucination Generation’ began shooting in Ibiza on the 10th of June 1965. Some shots of the island feature images of the Marina district, which reflect the bohemian and cosmopolitan atmosphere of the beatniks who roamed the bars of Port Vila. The film also has shots of several Ibizan beaches and different locations of Barcelona.

‘Hallucination Generation’ is one of the first commercial films in cinema history that reflects the consumption of LSD. According to the press kit, the American director Edward Mann interviewed several people who had taken LSD and listened to several recordings of subjects who were under the influence of drugs.

Edward Mann was a cartoonist for several American newspapers and also one of the founders of the influential theater company; Circle in the Square. In the late fifties he was in Spain, where he tried to film an adaptation of the book of Juan Ramón Jiménez, ‘Platero y yo’ (1917). In some databases the authorship of ‘Hallucination Generation’ is incorrectly attributed to Zaragozano director Santos Alcocer, who signed under the pseudonym Edward Mann his films that were distributed overseas. Although Alcocer and American Edward Mann may have met before, (both worked with producer Robert D. Weinbach) news found in the press about the filming of ‘Hallucination Generation’ points that the American director is the author of the film.

In ‘Hallucination Generation’ the Chilean painter Andrés Monreal was involved as art director, who told Diario de Ibiza the following anecdote about the production of this low budget film: “I remember I had to paint all the pictures of the artist in the film. As things in cinema are always made in a hurry, I had to paint about fifty paintings in one morning. Once finished the shooting, we gave out the paintings to all the people who had helped us so graciously. Probably some of them still decorate the walls of some farm houses. Naturally I had to sign those paintings with the name of the fictional character in the movie. ”

El crimen de la calle Aragón also slightly inspired partially the plot of ‘Tuya siempre’ (2006), Spanish film directed by Manuel Lombardero, in which a small reference to Ibiza appears in one of the dialogues.