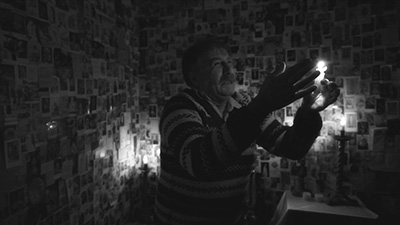 Synopsis: The son of a taxidermist returns home where he re-encounters his father, an unstable person with an obsession towards God, who only brings back memories of the tragic events that happened under that roof.

Short film shot in early 2013, in the family house of director Dalt Vila and a cottage in Santa Eulària.

The film is an extensive monologue of the father, played by veteran Ibizan actor Juanjo Torres. A film shot in black and white using the subjective camera technique.

Selected in 2013 to participate in the Morbido Film Fest of Mexico, also in Zaragoza at “La Mirada Tabú” and the Hemoglozine of Ciudad Real. Participating in 2014 in the contest Horror Film Fest of Puerto Rico.