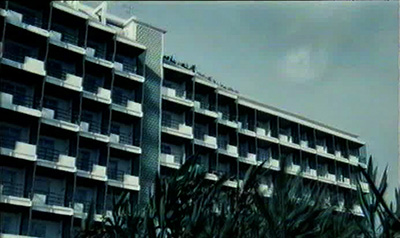 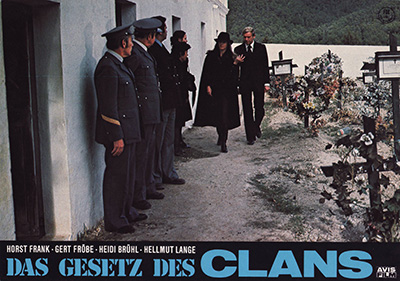 Synopsis: Pepe Coronado is the director of a successful hotel in Ibiza. He has relations with a mafia clan and after a bad economic streak he decides to kill Anne, his wealthy wife and owner of the hotel, in order to collect the insurance money and pay off his debts to the clan. After killing his wife by electrocuting her and making the crime look like an accident, two investigators from the insurance company move to the island to investigate the incident.

German production filmed in late 1976 in the city of Santa Eulària des Riu and Ibiza town. The Hotel Fenicia, located in Santa Eulària, was the place chosen to develop most of the action of the film and to film. To filmi the movie in this place, the shooting had to be done during the month of November when the hotel was closed, paying one million pesetas for the rent of it.

‘Das Gesetz des Clans’ is starring Horst Frank, an actor with a long filmography in which we find another title shot in Ibiza, ‘Der Scheck heiligt die Mittel’ (1974), in which Frank portrayed the American writer Clifford Irving . In ‘Das Gesetz des Clans’, the German actor played José Coronado, a fictional manager of the hotel where the plot takes place. The name of this character makes an allusion to the Ibizan José Colomar, born in 1932 and head of Hotel Fenicia since its opening in 1967-1978. According to statements by Colomar himself, running a hotel so young inspired the scriptwriter Hanne-Lore Morell to write part of the plot. Colomar also appears briefly in a scene from the film, being one of the extras playing tennis when the murder of the women occurs.